The full menu will be released soon & will be available in the Northcote Restaurant in January & February 2021 – follow us on social media for the full details!

An exciting new five-course gourmet menu captures the spirit of the celebratory dishes Lisa created for BBC Two’s Great British Christmas Menu. A gourmet break at Northcote is the perfect time to enjoy a peaceful getaway.

Following an incredible launch to our Northcote at Home Gourmet Boxes, we are pleased to announce we will continue them into next year. We offer nationwide delivery or local collection from Northcote. Our 2021 dates will be released soon.

It’s the final day of the competition before the key workers banquet as the chefs prepare their desserts and petits fours for the judging panel. Today its Oliver Peyton, Matthew Fort, Kerry Godliman and singer Beverley Knight who will be sampling the cunilary delights…

Lisa’s creation of her snowglobe includes a chocolate brulee base with spice and lime and praline mousse, before layering with mousses and a hidden praline sphere.

The judges eagerly awaited its delivery as Lisa adds the final flourishes and the delicate sugar globe top.

Kerry was emotional immediately after seeing the edible ‘thank you’ rainbow under the globe shell as Lisa dished out the lime snow.

Beverley couldn’t stop smiling Matthew said there is ‘something fantastically enjoyable about breaking a caramel globe’. It was clear that Lisa’s dessert had ‘smashed’ it and would take some beating to the top spot.

The final three chefs were left to make their Petits Fours as Lisa took a well earned break from the kitchen, then it was back to face the judges to reveal who had won the courses.

With a clean sweep of four 10s from the judges, it was clear Lisa was the run away winner of the dessert!

A new first for GBM: Lisa is the first chef to get three courses through to the final meal. What an amazing achievement!

So all that remains is the final episode, when we will get to see the incredible dishes being enjoyed by the people who deserve them most; our NHS and key workers.
Don’t miss the episode!
Christmas Eve, 9.15pm, BBC Two

Onto the final courses of the key workers banquet and two mystery GBM veterans joined the competition for dessert; Tommy Banks and Simon Rogan.
The pressure was on for Lisa with two dishes already through to the banquet; could she make it to the top three for dessert?
It was straight to work for Lisa, with eight elements of her dessert to prepare and assemble, there was no time to waste.

Her elegant Christmas snowglobe took a steady hand and lots of technical ability to get the sugar domes just right to sit on top. The lime ‘snow’ was prepared for diners to add themselves and the plating up was underway.

Her desserts were delivered to the Shakin Stevens song Merry Christmas Everyone which begins with the line ‘Snow is falling, all around me’, a suitable lyric to match the fun and colourful food.
The chefs were invited to smash the top and add the lime snow which created a little cloud of dry ice as they complimented the fun and tasty dish.

Chef Richard Bainbridge added: “I can’t not give it a 10…because it needs to be at the banquet.”

Then came the scoring to find out which three dishes will go through to the judges tomorrow. Host Andi Oliver revealed the winner first, and much to her surprise…it was Lisa! With 9, 9,  9, 10 from her peer chefs, she was the clear winner after all the other chefs had issues with their desserts.

Petits Fours next and as the chefs gathered in their festive headgear, Andi explains that as Lisa has potentially three dishes through already, she will bow out of the Petits Fours round.

Will Lisa be victorious with her dessert tomorrow? It will be an exciting watch…don’t forget to tune in at 8pm!

After an exciting day yesterday for the chefs, they must now make their dishes again for the judging panel. Oliver Peyton, Matthew Fort, Kerry Godliman and this week’s guest judge Professor Tim Spector OBE from King’s College London. His symptom-tracking app, used by more than four million people, has revealed vital information about Covid-19.

Lisa missed out on cooking her fish course for the judges, but there were high hopes for her Fallow Deer main course.

“I think I’d probably cry” exclaimed Lisa when Andi asked how she’d feel to win…we didn’t have long to wait to find out!

The judges table was adorned with Lisa’s main course and Oliver Peyton declared himself carver for the venison.

Matthew Fort said he had never tasted fallow deer with this much flavour and Kerry’s Celeriac-based dish left her feeling content.

Onto the all-important reveal of who won the main course, and with four 9s for Lisa – she is victorious!

Lisa look startled at first and was clearly emotional at being chosen:
“Wow! I don’t know what to say! Thank you very much. I’m completely honoured.”

It is the second dish Lisa has got through to the banquet, with two dishes still to be decided next week – we’re sure another exciting week awaits!

A couple of familiar faces joined the kitchen to do battle for the fish and main courses – Jason Atherton and Tom Aikens! As it was revealed that Lisa is the only chef competing for every course at the banquet, she set to producing two spectacular dishes for chef scoring… Lisa wasn’t the only chef to choose Turbot for the fish course, as Niall Keating both settled on pairing ‘King of the Seas’ with Caviar and a Champagne Sauce. It was the battle of the Turbots as Lisa plates her dish: Chervil Emulsion, Champagne Sauce, Turbot, Cucumber, Chervil fronds.

The stunning presentation is the work of The Flower Shop, Clitheroe, who kindly provided all the floral accompaniments for Lisa’s GBM dishes.

The chefs said her fish was cooked ‘perfectly’, but she sadly missed out on a top three place and cooking this dish for the judges. Fish courses scored, it’s onto the mains and time to see what Lisa has up her sleeve to hopefully cook for the judges tomorrow! Baby Beets and Venison are prepared and the tempting sounding Game Chips go into the stock pan.

Reflecting on this dish, Lisa says she is ‘proud’ of how it looks and hopes it is enjoyed…

Jason Atherton says that the Venison is befitting of the special occasion, and Niall Keating says the dish deserves a 9.

It is down to host Andi Oliver to reveal whose dishes are through to the judges…a close call with two chefs tying in third…but Lisa comes first for her Fallow Deer!

With four 9s, Lisa came out on top, and looked a little taken aback by this result. But she needen’t have been surprised – Andi described it as ‘beautiful cooking…wonderful venison’.

Tomorrow she must repeat this incredible dish for the judges…we can’t wait! The opening episode introduced the chefs and the programme’s new format as they set to producing banquet-worthy dishes to honour and thank key workers.

Lisa’s canape was a beautiful nostalgic music box, complete with a rendition of Jingle Bells.

A delicate pastry shell encases a smoked salmon mousse, caper jam in the base, salmon caviar and the added twist of frozen lemon pearls sitting on top of the delicious mouthful, finished with a sprig of dill.

The chefs who were blind scoring the canapes complimented its ‘incredible’ presentation, a taste reminiscent of ‘Christmas breakfast’ and the lingering zest of the lemon after eating.

Her canape came second after scoring 8, 7, 8, 8 from the chefs, meaning it’s through to the final three to be judged on on Wednesday. 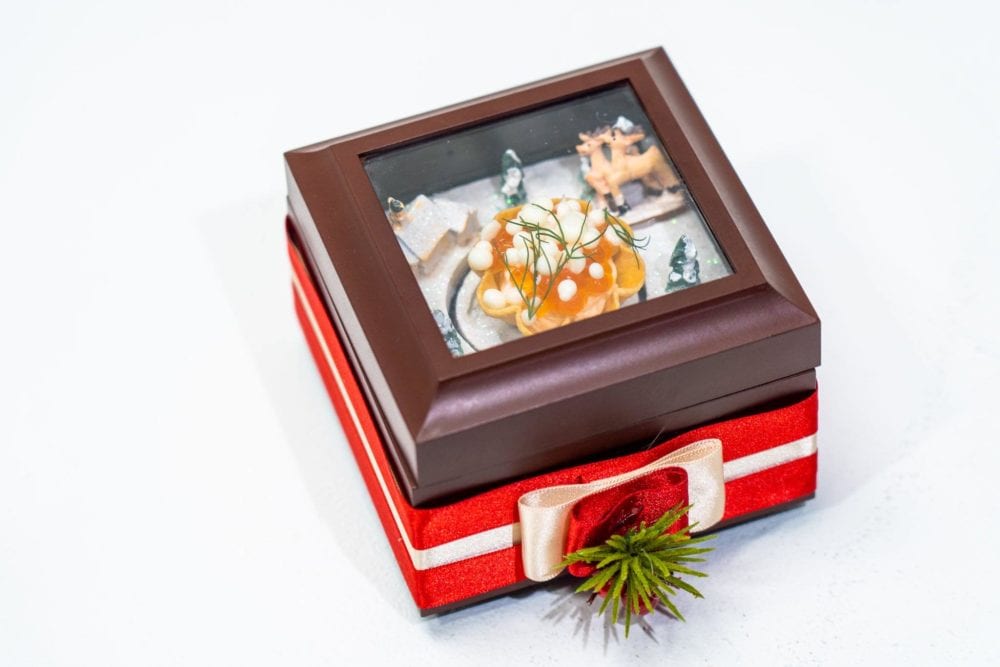 Then it was onto the starters. Lisa set to work on her Onion Consomme, served with a wreath of brioche and a brie centre to share, appealing to the sharing aspect of festive food.

The consomme is poured over caramelised roscoff onions and balsamic shallots. Onion foam is spooned onto the top with a maltose cracker.

The showstopping crown of warm brioche is served amid festive leaves and berries, with its baked brie heart the perfect centre to dip in the soft bread.

On tasting the dish, the chefs said the the onion soup was ‘one of the best’ they’d tasted and ‘absolutely delicious’.

Scoring 7, 7, 8, 9, Lisa’s starter once again earned her second place and through to the judges. As an added challenge, the chefs must create a vegetarian alternative too. Lisa’s Retro Christmas Canape is being created again, with the fish free version including avocado, macerated tomato and a hint of chilli. Making only one minor change to her lemon pearls, those stunning music boxes were presented to the judges.

As the canapes were brought out, guest judge Kerry Godliman exclaimed: “One you’ve had a meal like this you can’t go back! I want every meal in a music box!” There were smiles from all four judges as We Wish You a Merry Christmas sounded from the decorative boxes.

The changes to the lemon pearls were welcomed by Oliver Peyton who praised the topping: “They could easily have overpowered the salmon, but they didn’t and really set it off beautifully.”

Apetities whetted, it was onto Lisa’s starter as she added the final touches to her festive brioche and brie wreath, with a stunning layered onion consomme on the side.  After fears it would leave diners a little too full yesterday, she tweaked some of the portion sizes down slightly. As the dish is already vegetarian, Kerry could enjoy the exact same dish as the other judges.

The stunning presentation did not disappoint, with a touch of dry ice contributing to a touch of drama on the wreath, which was created along with Lisa’s other stunning floral props by The Flower Shop, Clitheroe. Matthew Fort quickly describes the brioche as “textbook” and the whole dish “divine” and Vicky Hall said: “That is a seductive meal to me.”

Once all the dishes had been enjoyed, the judges start their deliberations ahead of scoring and choosing a winning chef for each course.

Reflecting on her performance, Lisa said: “I think I have given it my all so far. If I can get once dish to the banquet, it would be amazing.”

A surprise was to come when revealing the winner… in fact al lthe chefs’ canapes would feature at the banquet, each one scoring perfect marks from the judges, a GBM first!

Onto the starter judging, and scoring four 9s, Lisa’s bread wreath was just pipped by Alex, who achieved a perfect score of 40.

Next week we will see what the chefs decide for their main courses and who will get through to cook for the judges as the competition to cook for the key workers banquet hots up!

The final menu will be enjoyed by specially-chosen NHS staff and key workers as a heartfelt thank you for their efforts during the Coronavirus pandemic.

Lisa will be up against eleven incredible chefs with 17 Michelin stars between them, as they do battle to produce an unforgettable six course Christmas menu.

Tune in each Tuesday and Wednesday for the next three weeks, when Lisa returns to the GBM kitchen, 10 years after her winning Rabbit Turnover starter was served to Prince Charles at the 2010 banquet.

We’re incredibly excited to see the dishes Lisa cooks for this very special competition, honouring the very people who have given so much during this challenging year.